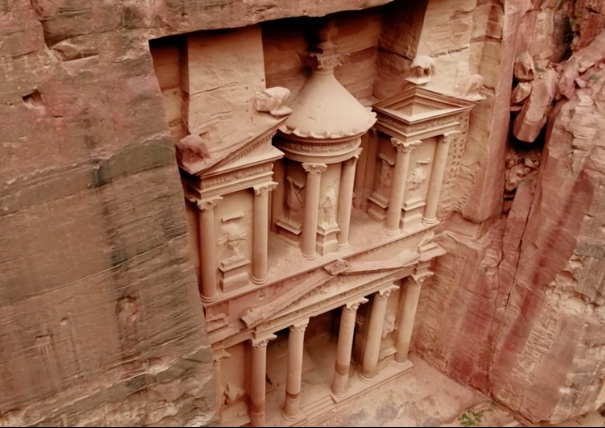 The blend of architecture and greening. Then we have

Writing early in the first century A.D., the Greek historian Strabo reported that while foreigners in Petra are “frequently engaged in litigation,” the locals “had never any dispute among themselves, and lived together in perfect harmony.” Dubious as that may sound, we do know that the Nabateans were unusual in the ancient world for their abhorrence of slavery, for the prominent role women played in political life and for an egalitarian approach to governing. Joukowsky suggests that the large theater in the Great Temple that she partially restored may have been used for council meetings accommodating hundreds of citizens.

Strabo, however, scorns the Nabateans as poor soldiers and as “hucksters and merchants” who are “fond of accumulating property” through the trade of gold, silver, incense, brass, iron, saffron, sculpture, paintings and purple garments. And they took their prosperity seriously: he notes that those merchants whose income dropped may have been fined by the government. All that wealth eventually caught the attention of Rome, a major consumer of incense for religious rites and spices for medicinal purposes and food preparation. Rome annexed Nabatea in A.D. 106, apparently without a fight.